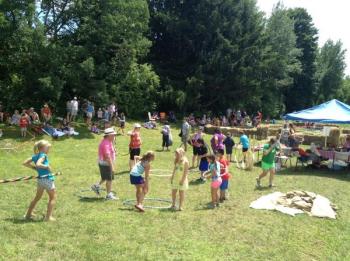 The Littleton 300th Picnic Committee welcomed everyone on July 12, 2014 as we celebrated the birth of Littleton and our nation with an Old Fashioned Town Picnic at the Littleton Middle School campus.

Gates opened at 10 a.m., and a variety of games and music began at 10:30 prior to the official picnic opening at 12:00 p.m. All activities were free unless indicated. There were some chairs and tents on site, as well as hay bales scattered throughout the picnic site for seating, but picnickers were encouraged to bring their own chairs and sunshade. The Picnic officially ended at 3:00 p.m. and the gates closed at 4 p.m.

Littleton citizens packed picnic baskets full of their favorite foods and non-alcoholic drinks. They brought blankets and chairs, and came gather to celebrate our community. Guests enjoyed music featuring Ball in the House, or followed the scarecrows and joined in a wide range of activities for the youngsters as well as the young at heart! There were old-fashioned games and entertainment; sack races, a pie-eating contest, a hay maze, watermelon seed spitting, and more! We provided a community dessert with berries from our local farms.

And, of course, many brought their cameras to document the fun! There were plenty of opportunities to take pictures of friends and family members participating in games and peeking through several cut-outs at the picnic!

Picnickers brought their own picnic lunches, and at 2 p.m. we provided a community dessert featuring the scrumptious berries from Spring Dell Farms. There was a $3.00 hot dog lunch available for purchase at the Picnic, as well as patriotic popsicles for $1.00, beginning at 11:30 a.m. and going until 2:00 p.m. Popcorn and cotton candy was also on hand as a free treat!

There was music all day, both on the main stage and spread throughout the grounds, with a special guest performance from Ball In The House.

Sign-up for participation in the Pie-Eating and Skillet-Throwing contests was available at the Tercentennial booth at the entrance.

There was a hay bale maze for our younger (and young at heart) picnickers to enjoy!

Sidewalk chalk and Bubble stations were scattered throughout the picnic.

Featured at the picnic was a gathering of scarecrows, both from the Common as well as from picnickers yards. Guests roamed the grounds enjoying the artistry of our scarecrow-makers! In addition,  there were artful cut-outs and many people staged their own photo-ops!

Parking was available at the Littleton Middle School, Russell Street School and at the Shattuck parking lot behind the town offices. Handicapped parking was located on Russell Street in front of the Middle School. People were invited to ask the Explorers for help, and there was an easy access ADA path to the activity areas.

250th attendees for the 300th photograph at the Town Picnic

We asked our citizens: Where were you 50 years ago in 1964? By any chance were you celebrating Littleton’s 250th? We invited all former and present Littleton residents that were at the 250th anniversary celebration in 1964 to come join us for a photograph at the Middle School on Russell Street during the Tercentennial Picnic on Saturday, July 12, 2014, at 11:30 a.m. They gathered outside near the gym door entrance at around 11:20 a.m. to sign their names so we would have a record of all of the people in the group photo.